“Heading Back Home” Film Returns to Franklin Theatre for Encore on Nov. 30

Three Showings Coincide with Anniversary of the Battle; Film-maker to Moderate Panel Discussion

“Every living, breathing American should see this…”

“Tells the story of the Battle of Franklin like never before…” 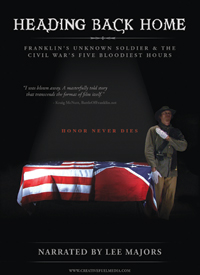 Those who weren’t able to purchase tickets for the sold-out premiere of the film Heading Back Home: Franklin’s Unknown Soldier and the Civil War’s Five Bloodiest Hours are getting a second chance to see it on the big screen. The Franklin Theatre will hold three encore showings of the film on Nov. 30 – the 147th anniversary of the Battle of Franklin – with the evening showing followed by a panel discussion.

“There has been so much pent-up demand around this film that we wanted to provide another opportunity for the public to experience it at the Franklin Theatre,” said Sara Preston, Program Director for the theater. “It made good sense to tie in with the anniversary of the battle for the encore presentation.”

The film will be shown at 2 p.m., 4:30 p.m. and 7 p.m. on Nov. 30, with the evening showing to include a panel discussion with Battle of Franklin Trust Director of Operations Eric Jacobson, Lotz House Foundation President J.T. Thompson, and Columbia State History Professor Thomas Flagel. Brian Speciale, who wrote, directed and produced the film with his wife, Jodi Jones-Speciale, will moderate the discussion.

Tickets are available now at www.franklintheatre.com, with the early showings at $5 and the 7 p.m. presentation for $12.

Heritage Foundation Executive Director Mary Pearce says the film has added a new dimension to the story of what happened in Franklin on November 30, 1864.

“Viewing this film is the best and most enjoyable way to gain an understanding of the Battle of Franklin, and it’s so important that people of all ages understand our history,” Pearce said. “The discovery of the soldier’s remains and the way the community honored his sacrifice illustrated that our history matters to our citizens. I encourage everyone who hasn’t yet seen the film to come. You won’t be disappointed.”

DVDs of the film are also available at www.battleoffranklintrust.org, or in the gift shops at the Carter House and Carnton Plantation.