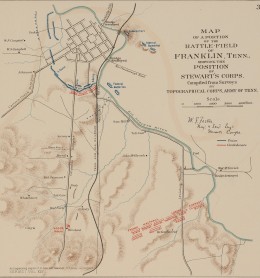 Franklin’s Charge is A Vision and Campaign for the Preservation of Historic Open Space.

Franklin’s Charge is a § 501(c)(3) Tennessee nonprofit corporation organized in 2005 dedicated to preserving America’s threatened Civil War battlefields in Williamson County, Tennessee. In addition, Franklin’s Charge has actively worked to educate the public about the 1864 Schofield- Hood campaigns, the 1864 Battle of Franklin, the 1863 Battle of Thompson’s Station, the Union earthworks in Triune, and other Civil War events in Middle Tennessee. Further, Franklin’s Charge has been an active participant in heritage tourism, American Civil War history programs, and preservation efforts.

What Are We Doing:

END_OF_DOCUMENT_TOKEN_TO_BE_REPLACED

Your financial commitment will help to acquire and preserve at-risk historic open space in Franklin for all to experience and enjoy in the years to come.