A crowd funding video has been launched on Facebook by Franklin’s Charge to help publicize a campaign to raise money to buy 1.6 acres of land adjacent to the historic Carter House on Columbia Avenue by May 31, 2015.

“We are trying to tell our story with the use of this video and crowd funding platform,” said Robert Hicks, founding chair emeritus of Franklin’s Charge, and author of the New York Times bestseller “The Widow of the South.”
“This hallowed ground is not simply about a Franklin park, but about a very important piece of our nation’s patrimony. Something really important happened here.”
Franklin’s Charge and the Battle of Franklin Trust contracted to pay $2.8 million for the lan 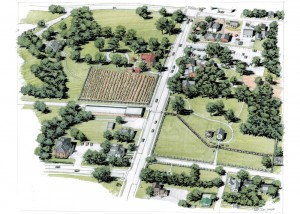 d, which now includes the property where Franklin Flower and Gift Shop and the Williamson County Court Appointed Special Advocates office are located. This property was where Confederate and Union soldiers had the bloodiest fighting of the battle, which occurred 150 years ago this Sunday, Nov. 30.
In addition to Hicks, a variety of historians, preservationists, educators, business and civic leaders produced the video to publicize the campaign outside of Middle Tennessee. Included are Shanna Jackson of Columbia State University, Julian Bibb of Stites and Harbison Law Office, Margie Thessin of Franklin on Foot Tours, Eric Jacobson of The Battle of Franklin Trust, Stuart Tuttle of New Hope Academy, actor/producer Rob Hodge, historic gardener Justin Stelter, Kelly Gilfillan of Home Page Media Group, and historic interpreter Thomas Cartwright.
The City of Franklin produced the project’s video, which was recorded and edited by Stephen Price.
“When I speak to groups around the country I hear, ‘You folks in Franklin are doing a good job preserving your battlefield,’” said Greg Wade, founder of the Franklin Civil War Round Table. “We scratch our heads and politely respond, ‘It isn’t Franklin’s battlefield, it is the country’s and your help is needed to preserve this bloodied ground.’”
Wade said he believes whether someone lives in Indiana, Texas, Wisconsin or Alaska, much of the nation’s DNA was shaped by battlefields like Franklin.
“First to succeed, we need your help — first and foremost — financially,” Hicks said. “But almost as important as your gift is the gift of your time. We need you to share the link to the Crowdrise site with your circle of friends, family and business associates.”
The video and the text on the Crowdrise fund-raising page explain the mission and video viewers are asked to share the link with friends and family.
“If we can make this video go viral, we truly believe we can reach our goal,” said Hicks, who also made a personal challenge with an edge of humor.
https://www.crowdrise.com/franklinschargeinc

END_OF_DOCUMENT_TOKEN_TO_BE_REPLACED

Your financial commitment will help to acquire and preserve at-risk historic open space in Franklin for all to experience and enjoy in the years to come.